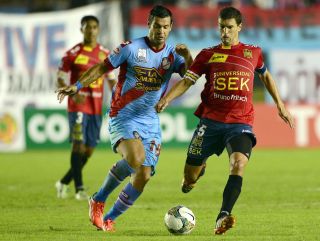 The Chilean visitors will take the slight upper-hand to their home leg on Wednesday, after holding the hosts at the Estadio Julio Humberto Grondona scoreless.

Union Espanola striker Sebastian Jaime got in behind the defence on 20 minutes, but the Argentine could not convert - with his shot blocked by the on-rushing Arsenal custodian Cristian Campestrini.

Arsenal forward Matias Sanchez generated the hosts' best chance of the game early in the second half, when he lashed home a volley from the edge of the area that was just off target.

With chances few and far between, Jaime had an opportunity to score a valuable away goal in the 83rd minute, but his header back across the face of Campestrini's goal was collected by the custodian.

Arsenal went down to 10 men shortly after, as defender Mariano Echeverria's second yellow card saw him depart the field, and subsequently banned for the return leg in Chile.

Despite the numerical disparity, Arsenal substitute Emilio Zelaya had one last chance to earn the Argentine club a first-leg lead, but his audacious effort from outside the area rocketed past Espanola 'keeper Diego Sanchez's left-hand post.