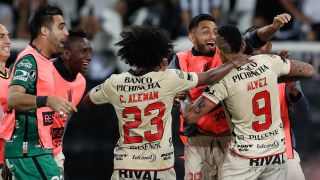 Jose Ayovi and Jonathan Alvez struck in the first half as Barcelona claimed a 2-0 win on Tuesday.

Ayovi opened the scoring in the seventh minute, outmuscling his defender before finishing.

Alvez made it 2-0 midway through the first half after Botafogo goalkeeper Roberto Fernandez came out but was beaten to a loose ball.

Barcelona (10 points) are top of Group 1 ahead of Botafogo (7), with Atletico Nacional and Estudiantes on three points.

Atletico Nacional recorded their first win in the group with a 4-1 thrashing of Estudiantes.

Mateus Uribe, Dayro Moreno, Andres Ibarguen and Macnelly Torres were on the scoresheet for the Colombian side.

Penarol slumped to a fourth defeat in five Group 5 games, going down 2-1 at Atletico Tucuman.

All the drama in Argentina came in the final 15 minutes as the hosts claimed a victory.

Fernando Zampedri headed in the game's opening goal in the 77th minute before Leandro Gonzalez doubled the lead.

Gaston Rodriguez scored a scrappy goal for Penarol in the 84th minute, but the hosts held on.

Palmeiras (10 points) lead the group ahead of Atletico (7) and Wilstermann (6), with Penarol (3) bottom and unable to finish in the top two.