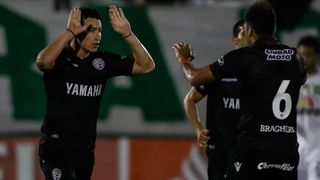 Lanus progressed to the Copa Libertadores knockout rounds after Chapecoense were penalised by CONMEBOL, while Santos romped to victory.

On an eventful day in South America, Chapecoense were docked three points for fielding a suspender player in Group 7.

CONMEBOL announced the sanction on Tuesday, with Chapecoense knocked out of the Libertadores as Lanus were awarded a 3-0 win after defender Luiz Otavio was deemed ineligible to play in the 2-1 victory on May 17.

The penalty – which Chapecoense plan to appeal – left the Brazilian side on four points heading into Tuesday's final game, with Lanus on 10 points and Nacional on eight.

And Lanus made sure of their position atop the standings after travelling to Uruguay and edging Nacional 1-0.

It was not all bad news for Chapecoense, who completed a stunning 2-1 win against Zulia to secure a spot in the Copa Sudamericana as a result of finishing third.

Trailing 1-0 in stoppage time, Arthur and Andrei Girotto struck in the 91st and 92nd minute to upstage 10-man Zulia on home soil.

Santos made it through Group 2 as undefeated leaders after routing Sporting Cristal 4-0, while The Strongest joined them in the last 16 following their 1-1 draw at Santa Fe.