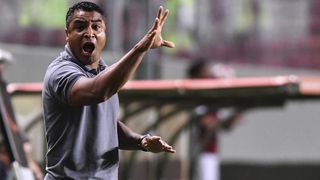 Atletico Mineiro claimed a big win to close in on the Copa Libertadores knockout stages, while Flamengo bounced back.

Mineiro climbed to the top of Group 6 courtesy of a 5-1 thrashing of Sport Boys in Bolivia on Wednesday.

Juan Cazares opened the scoring after a defensive error before Rafael Moura struck in the 17th minute with a sublime finish into the top corner.

A Jose Castillo penalty before half-time gave the hosts hope, but that disappeared thanks to Elias and Romulo Otero, the latter the beneficiary of a goalkeeping howler.

Cazares sealed his brace to complete the result, which has Roger Machado's Mineiro (10 points) and Godoy Cruz (10) clear of Libertad (4) and Sport Boys (1).

Flamengo are two points clear at the top after late goals from Paolo Guerrero and Miguel Trauco saw them past Universidad Catolica 3-1 in Rio de Janeiro.

Santiago Silva had cancelled out Rodinei's opener in the second half, but Flamengo responded late on.

Flamengo (9 points) are ahead of San Lorenzo (7), who recorded a comfortable 3-0 win at Atletico Paranaense.

Group 5 leaders Palmeiras suffered their first loss by going down 3-2 to Wilstermann, while Deportes Iquique claimed a third straight win in Group 8 by overcoming Gremio 2-1.