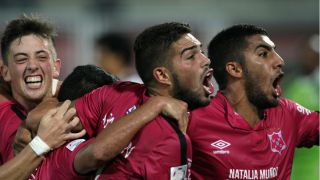 Boca completed a perfect group-stage campaign with a 2-0 victory over Palestino, while Wanderers triumphed 3-0 away to Zamora to secure second position in Group Five.

Wanderers hit the front in the 34th minute in Venezuela when Matias Santos slid in to turn Joaquin Verges' cross past Zamora goalkeeper Edward Ibarbo.

Nicolas Albarracin doubled the visitors' lead in impressive fashion just after the hour-mark, controlling the ball on the edge of the area before driving it into the bottom corner, while the midfielder teed up Gaston Rodriguez in the 88th minute to complete the win.

The victory took Wanderers (10 points) above Palestino (seven), with Boca (18) well ahead in the group standings.

In Argentina, Leandro Marin struck in the 90th minute and Jonathan Calleri also got on the scoresheet deep into stoppage time, as Boca made it six wins from as many matches.

A brace from Nilmar saw Internacional crush Universidad Chile 4-0 to rise above The Strongest to the top of Group Four.

Nilmar played a role in all three of the Brazilian visitors' goals in the first half, setting up Eduardo Sasha to make it 2-0.

Internacional (10 points) lead The Strongest (nine) and Emelec (seven) with one matchday remaining in Group Four.

In Group Two, leaders Corinthians were held to a scoreless draw at home by San Lorenzo.