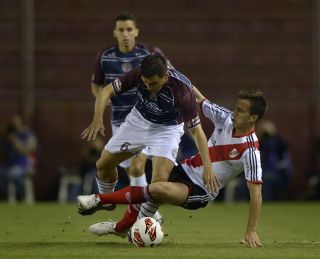 After keeping a clean sheet at the Estadio Ciudad de Lanus, River Plate will be without Eder Alvarez for their home return leg after the Colombian defender was sent off in the dying stages in southern Buenos Aires.

The scoreless stalemate saw River Plate's goal drought extend to 450 minutes, although their last strike did come against Lanus in the Argentina Primera Division - which gives them hope of breaching their defence again next Wednesday in order to book a semi-final spot.

River goalkeeper Marcelo Barovero kept Lanus at bay on Tuesday, pulling off a number of saves - including one from point-blank range to deny Victor Ayala.

Manuel Lanzini then almost won it for River, as he had a clear-cut one-on-one chance with Lanus goalkeeper Agustin Marchesin but the shot-stopper won the battle to ensure the match would finish scoreless.

The winner is guaranteed their place in the 2014 Copa Sudamericana group stages.