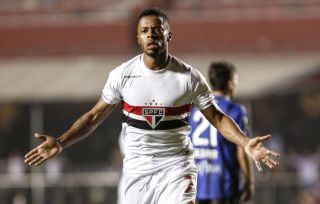 Michel Bastos - back in the starting XI after serving a one-match suspension - was on target in the 56th minute as 10-man Sao Paulo ended their four-game winless streak.

Sao Paulo went into Tuesday's home fixture out to arrest an alarming form slump, having lost three of their past four Brazil Serie A matches. They had also conceded 11 goals in that period.

But Sao Paulo returned to the winners list, despite playing almost an hour with 10 men against their Chilean opponents.

But the home side were not to be denied first-leg honours against Huachipato, as utility Bastos netted the match-winning goal 11 minutes into the second half.

The former Lille, Schalke and Roma man sidestepped two defenders before curling the ball past goalkeeper Miguel Jimenez from outside the penalty area.

Sao Paulo will take a one-goal advantage into the return leg on October 15.