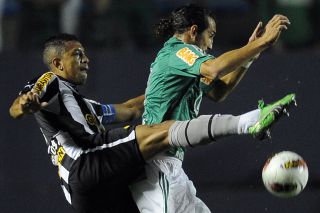 The Brazilian hosts at the Estadio Cicero Pompeu de Toledo had been pegged back twice by the Colombian visitors, before Carlos' second goal in the 90th minute earned them a slight advantage for next week's second leg.

Earlier, Jadson struck on 14 minutes - only for Atletico to go into half-time level after Fernando Uribe equalised.

However, Carlos had the last say in proceedings - netting at the death to give Sao Paulo the all-important advantage heading to Colombia.