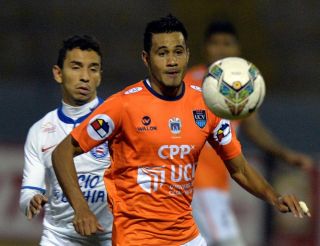 Peruvians Cesar Vallejo left it late to beat Bahia 2-0, levelling the round of 16 tie against the Brazilians at 2-2.

And the Estadio Mansiche hosts in Trujillo edged to a 7-6 victory on penalties.

Ronald Quinteros brought Cesar Vallejo into the tie with an 83rd-minute goal and William Chiroque made it 2-0 in additional time.

What followed was a 20-effort shootout, with Bahia squandering two opportunities to win it from the spot.

Bahia goalkeeper Marcelo Lomba proved to be the villain, missing the 20th penalty as his team bowed out.

Ecuadorians Emelec suffered a 1-0 loss at Goias, but prevailed 6-5 on penalties after the tie finished 1-1.

Erik's 20th-minute goal saw the Brazilians force a shootout, only for Emelec to respond to edge the spot-kicks.

Sao Paulo had a thrilling 3-2 victory at Huachipato, completing a 4-3 aggregate win.

The hosts in Chile continually fought back, with Andres Vilches cancelling out Michel Bastos' opener.

Ganso restored the Brazilians' lead midway through the first half, but Anyelo Zagal levelled on the night late on.

Paraguay's Deportivo Capiata only needed a 44th-minute own goal from Lisandro Magallan to beat Boca Juniors 1-0 in their first leg in Argentina.