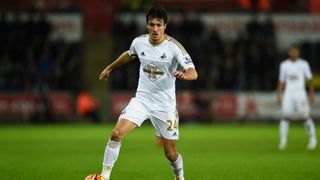 Jack Cork says Swansea City are motivated to "prove a point" to those who doubt their quest for Premier League survival.

However, following the appointment of Francesco Guidolin as manager, Swansea have picked up back-to-back victories to move themselves up to 15th place in the table.

Midfielder Cork admitted to have taken notice of the stories surrounding the team’s chances and believes they have been underestimated.

"It's not nice reading stuff like that, but it's always nice proving them wrong," he told South Wales Evening Post.

"We could see what people were saying and our form has not been good lately, but you can never write this team off.

"We've got some great players with great quality.

"Sometimes it's okay being the underdog because there's no pressure on you.

He added: "At the beginning of the season we had quite a lot of pressure to do well. Now it's the opposite so maybe that will suit us.

"I have seen what's been said about us and it's not nice. It makes you want to prove a point.

"It was looking quite bad after we lost to Sunderland, but two wins gives us six points and puts a completely different perspective on things.

"Hopefully, if other teams were watching what we did at Everton, it will make them feel a bit low, while it will give us a boost going into the West Brom game."