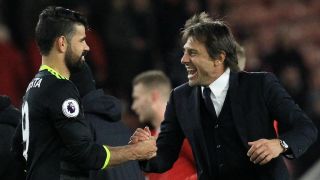 Chelsea forward Diego Costa has won the Premier League Player of the Month award following his fine performances in November, with boss Antonio Conte winning the Manager of the Month.

The Spain international netted once and set up another in the 5-0 win over Everton, before scoring the only goal of the game against Middlesbrough and creating Chelsea's winner against Tottenham.

Costa follows in the footsteps of team-mate Eden Hazard, who won the award for October.

"Things are going well at the moment. The team is doing well and this shows that things are working out for me," the striker said.

"The team performance has a bearing on this individual award. If we were bottom, I doubt I would have won it.

"So, it is down to my team-mates, thanks to the club and hopefully we can continue this winning run.

"Thanks also to the fans for this award but the most important thing for me and the club is that we are up there fighting for the league at the end of the season."

Conte, meanwhile, was handed the Manager of the Month award for the second time in a row following Chelsea's three straight wins.

The Italian previously already took home the trophy for October, with Chelsea's fine run of form taking them to the top of the league.

His curling equaliser at Stamford Bridge against Tottenham stood out among a shortlist of eight goals.