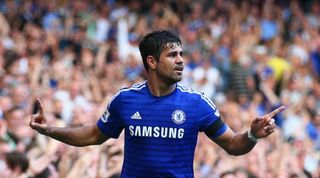 Costa has not played for Chelsea since featuring in Spain's Euro 2016 qualifiers with Slovakia and Luxembourg earlier this month, due to a combination of a hamstring injury and a virus.

The 26-year-old is in line to feature against Harry Redknapp's men at Stamford Bridge, though, while midfielder Ramires is also available again after a muscular problem but Loic Remy and John Obi Mikel are sidelined.

"Costa is available, it's good news for us." Mourinho said. "It's been difficult for us having only one striker [Didier Drogba] available. When you have two the situation improves.

"We don't have Mikel, it's not good for us because he's always an option, but the fact we have Ramires back is a compensation for that loss. The situation is a bit better."

Mourinho previously laid the blame for Costa's absence on Spain's mismanagement of his persistent hamstring injury, a claim refuted by the national team doctor earlier this week.

With Spain set for another international double header later this month, Costa's fitness and availability for his country is sure to once again come under the microscope.

Mourinho stated he has no problem with any of his players representing their national teams, but feels Spain must do more to manage the well-being of Costa.

"The only thing I can say is what everybody knows, which is at the time he was having problems at Chelsea and the way we managed him he kept playing," he added.

"Then after the national team he wasn't available. Now he is available again but he needs obviously to be under special care and we are going to do that.

"I am always supportive of players playing for their country when players are in condition to do that and the players in the national team follow the same kind of programme to recover from the problems they have."