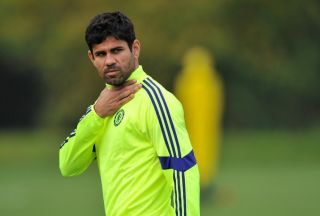 The 25-year-old has become an instant fans' favourite at Stamford Bridge with eight goals in six Premier League appearances since joining from Atletico Madrid in the close-season.

However, Costa has been plagued with a hamstring injury in the early stages of the season and Chelsea manager Jose Mourinho stated that he would struggle to play two games in close proximity because of the issue.

The Brazil-born striker started in Chelsea's 1-0 victory at Sporting Lisbon in the UEFA Champions on Tuesday and is once again expected to be in Chelsea's XI for the Premier League clash with Arsenal on Sunday.

After that match, Costa is set to join Spain's squad for the double header with Slovakia and Luxembourg, despite Mourinho's wish that he sit out those matches in order to est.

Asked if his selection for Spain could lead to a club versus country battle, Costa replied: "I think it is something that cannot happen.

"There was already a war with the Brazil issue and now I need to be left in peace to try and do things well for the national team. That is what I need and hopefully I will be in this next squad."

Costa is adamant he will be fine to face Arsenal despite the match representing Chelsea's third fixture in the space of nine days.

"Every time I play I feel better and it is a decision for the manager the best way to recuperate from the injury.

"During the week I am working intensively with the physios but [Mourinho] asks me regularly how I am to make sure I am in the best possible shape. The injury is not so bad. I will keep working to return to complete fitness."