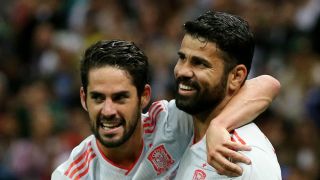 Diego Costa's solitary strike in Spain's win over Iran on Wednesday ensured the 2018 World Cup has not seen a 0-0 draw during the first 20 games.

The last time this happened was the 1954 World Cup in Switzerland, which did not see a goalless draw during the 26-game tournament.

Russia 2018 got off to a fast start with the host nation crushing Saudi Arabia 5-0 on June 14, with Spain and Portugal then playing out a pulsating 3-3 draw the following day.

While there has not been a glut of goals in the games since, fans can at least enjoy the fact they are yet to experience a scoreless stalemate.