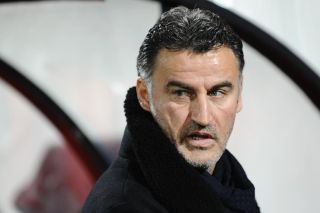 Having capped 2014 off with a goalless draw at home to Montpellier, PSG hit back against the same opponents in the Coupe de France before suffering a 4-2 reversal to Bastia in Ligue 1 on Saturday.

Laurent Blanc's side spurned a two-goal lead to lose at the Stade Armand Cesari, further denting their hopes of a third consecutive title ahead of their last-eight trip to the Stade Geoffroy Guichard.

With the champions' attentions reverting to the Coupe de la Ligue on Tuesday, Galtier says confidence is high among his squad after they extended their unbeaten run in the league to 11 games with victory over Reims at the weekend.

Goals either side of half-time from Yohan Mollo and Romain Hamouma condemned Reims to only their fourth home league defeat of the season on Saturday, leaving Galtier delighted.

"We are carrying out a very good plan," he told reporters.

"This was an away win against an opponent who are difficult to manoeuvre at home. It's very positive before the exciting week ahead.

"We must seize these moments and enjoy them. Now we need to recover well because the January schedule is difficult."

A quarter-final win would be the ideal tonic for Blanc's men after their surprise loss at the weekend, although he feels an improved respect for opponents is needed if they are to progress.

Talismanic striker Zlatan Ibrahimovic also urged his team-mates to "wake up" after the defeat as they seek to reclaim the Coupe de la Ligue, which PSG won for a fourth time last year.

As well as Blanc's concerns about his side's mindset, the former France international also urged PSG to improve at set-pieces.

"We maybe thought that the [Bastia] game was easy, that we'd win easily. Then the crowd wakes up and you know the rest," he said of the weekend's defeat.

"Scoring goals is already a concern, conceding goals at set-pieces is a concern but what worries me most is that we're not successful in the set-pieces we get. There is always a defender or an opponent to stop us scoring."

PSG have won each of their last three meetings with Tuesday's opponents - conceding just once - including an extra-time win in the Coupe de la Ligue's round of 16 last season.