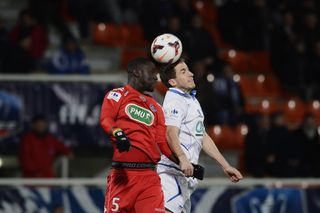 Nancy – winners of the competition in 2006 – simply had no answers for Viale's devastating display.

The forward scored just three times in all competitions last term, but started his match brightly with a ninth-minute strike.

Viale then doubled his account from the penalty spot four minutes before the break.

A red card to defender Ruben Aguilar in the 51st minute threatened to disrupt Auxerre, but Viale made sure of the win.

He sealed his treble 17 minutes from time to give Auxerre, who sit 14th in Ligue 2, victory.

All six of Tuesday's matches were played out between second-tier sides, as Ajaccio won 4-1 at Troyes.

Ajaccio, relegated from Ligue 1 last year after just four wins, scored all four of their goals in a 13-minute spell just after half-time.

Mouaad Madri opened the floodgates with a 52nd-minute effort that was quickly added to by Nicolas Fauvergue.

Frederic Piquionne struck the winner 10 minutes from time as Creteil edged Gazelec Ajaccio 2-1 in a match that saw both sides finish with 10 men.

A host of top-flight sides will enter the competition in the third round.