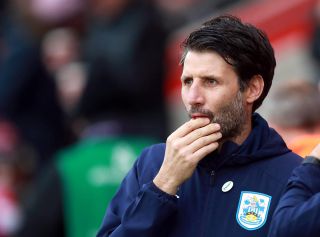 Danny Cowley believes Huddersfield’s battle to avoid relegation will go down to the wire following their 3-1 defeat at Swansea.

The Welsh side found the net first when Terriers goalkeeper Jonas Lossl palmed Aldo Kalulu’s fired cross into the path of Andre Ayew, who found the bottom corner for 1-0.

The visitors hauled themselves level after 78 minutes when Chris Willock’s shot was steered home by Steve Mounie, but Jay Fulton headed Swansea back ahead from Matt Grimes’ corner two minutes later.

Swans manager Steve Cooper could relax for the final stages as Conor Gallagher slipped in substitute Jordon Garrick, who rounded Lossl and slotted home to finish off a rapid counter-attack.

“Conceding a goal like that stinks of a team in a relegation battle,” said boss Cowley. “When you come in with one point from eight games you know what you’re in for. You know it’s going to be a long hard season that will go down to the wire.

“We want to get more consistency and I don’t want us to be so accepting, but we’ll continue to fight.

“We’re leaving Swansea very disappointed. We worked so hard to get back into the game, and then we concede like that. It can’t happen like that if you want to be a successful team.

“We had control and momentum in the second half and we certainly thought we’d take something from it. We concede such a soft goal. It’s frustrating and disappointing.

“You cannot give away free headers in your six-yard box. We have to go away and look at ourselves.”

Swansea remain five points adrift of the play-off places, but manager Cooper says they are still in contention.

“I don’t think we’ve ever been out of the play-off mix, truth be told, because the league allows that to be the case,” Cooper said. “We just wanted to win today. Our idea of how we want to play the game never changes.

“We were just really happy that we got what we deserved today. Everybody got what they deserved, the supporters, the players – and the last two games have been difficult here with the results.

“I’m pleased obviously. I thought we were more than good for the result. In the first half particularly, I thought it was as good as we’ve been for a while.

“I’m slightly frustrated it wasn’t two or three, Rhian (Brewster) got himself in and we looked a real threat throughout the first half and we were defensively solid as well.

“I didn’t really think we looked like we were going to concede. To respond the way we did, it would have been easy to feel sorry for ourselves and think we’re not getting the rewards, but we didn’t do that.”