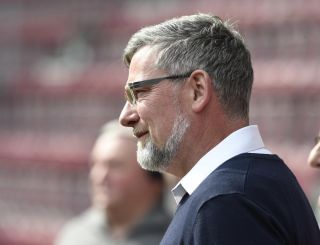 Hearts boss Craig Levein remains confident the players he has at his disposal are good enough to turn their season around as they prepare to take on local rivals Hibernian on Sunday.

The first Edinburgh derby of the season sees two struggling sides go head-to-head, desperate for a victory to improve their fortunes and low league positions.

But Levein, who received the public backing of Hearts owner Ann Budge this week, is adamant his injury-ravaged squad are good enough to get back to winning ways and he is well aware of the importance of doing so at Easter Road this weekend.

He said: “I feel this group of players are more than capable of climbing the league and getting us to where we want to get to.

“If I didn’t think that, then I wouldn’t be here – it’s as simple as that. There isn’t any situation where I’ve looked and thought we’ve not got the players to get us out of this.

“And if I did think that I would have told Ann that a while ago. My interest is purely making Hearts as good as they can possibly be and I believe I can do that with this group of players.

“I’ve been in the game long enough to know that the situation we’re in – being bottom of the table with two points after five matches – is not a great situation to be in.

“I’m well aware of the circumstances and what we need to do.”

Hearts’ poor start to the season has led to unrest among the Tynecastle faithful, piling further pressure on Levein.

When asked whether he feels his job is at risk, Levein replied: “In this business, I think 99 per cent of managers at some point in their career will have their job at risk, in fact 100 per cent.

“So that’s the constant that you live with when you do this job.

“I think winning matches is everything, isn’t it. We’ve got a big match on Sunday which is always an exciting fixture for everybody – the players, the coaches, myself and the fans in particular.

“So we go into this game with a view that we need to get three points because we need to climb the table as quickly as possible.”

Levein insisted it is vital to make a strong start on Sunday and pinpointed exactly what his side need to do to improve results.

“Whoever starts the game in a positive manner I’m sure will have the supporters behind them,” he added.

“I looked at the recent matches and spoke earlier in the week about the situation of us giving teams goals without them having to do an awful lot to merit the goals.

“If we can stop that, purely giving away crazy goals, then the league table would look a lot different.

“So the focus for us is not to assist the opponents, to do everything we can to stop them from scoring and I think that will then put us in a position where we’ve got a chance of winning.”

Levein could be handed a triple injury boost as Joel Pereira, Michael Smith and Steven Naismith are close to returning.