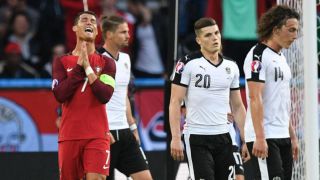 The recent sun-drenched photographs of choreographed holiday merriment with his chums must have felt like echoes from another, kinder age on this painful Parisian night of tragicomedy for Cristiano Ronaldo.

In the 12 years since losing on home soil as a teenager in the final of Euro 2004, he has never come closer to securing a major international prize.

As the clock ticks down on Ronaldo's time in the famous deep red of Portugal, this factor appears to bring a bristling prickliness closer to the surface than it ever is on his rare forgettable nights for Real Madrid.

This reared its head after the opening 1-1 draw with Iceland and has never been more visible than during this Euro 2016 Group F encounter with Austria at the Parc des Princes.

The sense of the 31-year-old too often ploughing a lone furrow for his national side was at least tempered by Fernando Santos' bold inclusion of Ricardo Quaresma's alongside him in a front three with Nani - Ronaldo's former Manchester United team-mate, who is playing with renewed confidence and altogether brand-new aerial capabilities.

Nevertheless, the frustrating game of pass the parcel between Ronaldo and Sweden's Zlatan Ibrahimovic over the prize of who will be the first player to score in four European Championships rumbles on.

Having been jeered by the Austrian hoards when he appeared on his way into the ground on the stadium screens, there was much mirth when Ronaldo steered Raphael Guerreiro's cutback wide from close range.

Ronaldo remonstrated with himself and then turned his anger towards referee Nicola Rizzoli after a minor infringement. He was in dialogue with the Italian official when the sides emerged for the second half. And he thought he was upset then.

This was the night Ronaldo became Portugal's record appearance holder, outstripping Luis Figo's 127 caps. It was not supposed to happen like this.

A more forgettable record Ronaldo holds is shots from the direct free-kicks in major tournaments without scoring. It is hard to imagine any of his 35 attempts being more ridiculous than the one from close to 40 yards that zeroed in on a three-man Austrian wall with painful inevitability.

More sinews strained, more popping veins. Then came a moment to draw gasp, a reminder that the star of this absurd one-man pantomime is in fact one of the greatest players to have ever graced the game.

The backlift was minimal and the strike so sumptuously sweet when Ronaldo pivoted to shoot left footed from the edge of the box. Robert Almer was equal to the task, making a stunning near-post save.

Austria's goalkeeper kept out the three-time Ballon d'Or winner's header from the resulting corner and watched free-kick number 36 sail over.

At that stage, the opposition fans turned up a simple mocking chant.

Perhaps the impish Barcelona genius is the true architect of whatever it is that eats at this exquisite sportsman. No matter, he was now part of the tangled web of misery Austria's players and supporters had trapped their superstar opponent within.

Unfortunately, Martin Hinteregger was not up with the plan and nearly tore the whole thing down, blundering into Ronaldo like the town drunk to concede a penalty.

Hundreds of camera phones dazzled behind the goal, waiting to capture history. He thudded his kick against the base of the post.

There was no rage this time, just the disconsolate look of a beaten man - one unfamiliar when etched across Ronaldo's chiselled features.

A disallowed header for offside seemed an almost cruel way to prolong his torture. The Austrians cheered, they laughed, they shouted "Messi", they laughed some more.

Ronaldo was left posing for a selfie with a pitch invader at full-time. Just when it seemed like nothing else could possibly go wrong on his dark night of the soul.