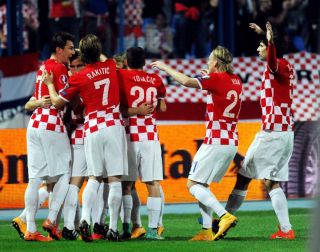 Croatia ran rampant in Osijek, piling on four unanswered goals in the first half before completing the rout with a further two after the break as the Balkan nation preserved their perfect record from three matches.

Kovac's side are flying high atop the group - ahead of Italy on goal difference - and the 42-year-old urged Croatia to build on the emphatic win in the coming fixtures.

"We pressed Azerbaijan high up the field for all 90 minutes," said Kovac.

"We created a lot of opportunities and were able to score more goals. The game was perfect.

"We were aggressive and strong, the way we have to play in future games."

Kovac added: "I congratulate our players on a terrific match and the crowd on a great atmosphere.

"In the last two games we taken won six points and have nine in total – the situation is great.

"We look forward positively but there are only three games behind us so we need to stay focused."

Meanwhile, goalscorer Modric called on his team-mates to remain focused in the wake of their dream start to qualifying.

"We have had the best start for many years and we should be happy but we shouldn't relax," the Real Madrid midfielder said.

"Our next match is against Italy. It is the biggest match in qualifying and I hope we will study them well and play a good match.

"So far we have a perfect record but there are still things to improve."