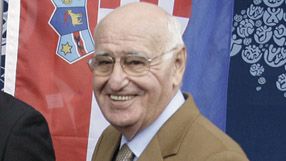 The 73-year-old, who managed Croatia for one match in 1993 having previously served four spells as coach of Dinamo Zagreb, claimed no gay players would be picked for the national side, currently coached by former Everton and West Ham defender Slaven Bilic.

"While I'm a president of the Croatian Football Federation, there will be no homosexuals playing in the national team," Markovic is reported to have told Croatian national newspaper Vecernji List, adding: "Luckily, only normal people play football."

Gay and lesbian rights groups have signalled their intentions to sue and report Markovic to UEFA, according to the Croatian Times.

Sadly, Croatian football has recent history when it comes to discrimination.

In September 2008 the Croatian FA was fined £10,000 after England players, including Emile Heskey, were subject to racist abuse during England's World Cup qualifying victory in Zagreb.