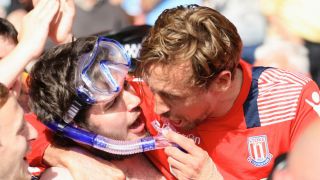 Stoke City striker Peter Crouch celebrated his winning goal in the club's final game of the season by keeping his word and handing his match-worn shirt to a brave fan who watched the entire match wearing only a pair of swimming trunks.

Crouch became the first player in Premier League history to score 50 headed goals when he netted Stoke's winner in a 1-0 victory at Southampton, and after the final whistle he made a beeline for the stands.

The 36-year-old striker's target was a Stoke supporter stood proudly in swimwear, complete with snorkel and goggles.

Crouch told BBC Sport: "I saw him before the game, he sent me some pictures from the pub beforehand. It was incredible, fair play to him.

"I'm glad we won so I could go and have my picture with a guy in speedos.

"Absolute hero and I am pleased we got the win for him as well."

Great way to end the season with a win and celebrating with the legend that is May 21, 2017