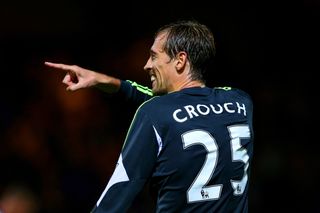 The 32-year-old, who netted eight times for the club in all competitions last season, has so far struggled for opportunities in the 2013-14 and is still awaiting his first Premier League goal of the campaign.

Stoke boss Hughes has favoured the likes of Jonathan Walters and Marko Arnautovic in attack ahead of Crouch, who has made two league starts since the Welshman succeeded Tony Pulis in May, but the England international has insisted he will not get disheartened.

"Of course it's disappointing at times. Everyone wants to play, and I'm no different," he told The Sentinel.

"But there's no point in moping around and throwing your toys out of the pram in training.

"You've got to go out there and work hard to try to change the manager's mind.

"I believe in my ability, and when given the opportunity I'm sure I'll be able to stay in the team.

"The manager's proved he's not afraid to chop and change, so you never know. I could be starting the game or could be coming off the bench.

"I'll prepare in the manner I've always done and be ready for the game on Saturday."