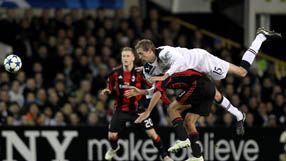 Crouch's goal at the San Siro proved decisive as the two teams fought out a tense 0-0 second leg draw in the last-16 at White Hart Lane on Wednesday which put Spurs through to the quarter-finals of the tournament for the first time.

Crouch came on as a late substitute when Milan beat Liverpool 2-1 in Athens four years ago when they won their seventh title, but was on the winning side as Spurs showed surprisingly resilient defensive qualities on Wednesday.

The lanky striker, who caused Milan problems until he came off in the closing stages, believes Spurs can emulate, or even better Liverpool's performance in 2007.

"When I reached the final with Liverpool in a lot of those games we had to grind results out," Crouch told reporters.

"If you are going to get to the final you have to face top class opposition, you're not always going to have the ball and I think if you defend well you're going to get results.

Asked if his Spurs team are better than that Liverpool one he said: "I think individually we are.

"In that Liverpool team that reached the final we were extremely organised, we knew our jobs inside out.

"Certainly this Tottenham side has got better individuals and probably more attacking with the flair that we've got."

While Crouch did the damage in attack, Michael Dawson, Spurs skipper on the night, had a superb match in defence and alongside William Gallas, managed to nullify the threat from Milan's forwards, the disappointing Zlatan Ibrahimovic, Pato and Robinho.

"I think tonight we proved something different. We can be resilient as well. So why can't we get to the final?

"Normally we are a very attacking team but tonight we had to change the way we normally play. I think the whole team has to take credit for the clean sheet."

Harry Redknapp, who has become the first English manager to guide a team into the last eight of the Champions League, was also buoyant afterwards, but kept his feet very much on the ground.

"Its been a great night for Tottenham, but we are not going to celebrate yet," he told reporters afterwards.

"This is an impossible dream for us, if someone had said two years ago we would be in the quarter-finals of the Champions League you'd have thought they were mad.

"I am just going home and not getting too carried away. I'll have a cup of tea and a bacon sandwich, an