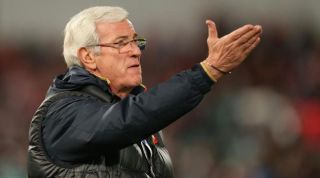 Marcello Lippi's men lead Guoan by six points heading into the top-of-the-table clash at Tianhe Stadium and need only a draw to become the first team to win four consecutive top-flight crowns in China.

However a defeat for Evergrande would cut the gap to three points and give Guoan a better head-to-head record with the two sides having played out a 1-1 draw in the reverse fixture in May, leaving the defending champions potentially facing a nervous final game of the season at AFC Champions League chasers Shandong Luneng.

Guoan kept the title race alive in thrilling fashion as a penalty in the fourth minute of injury time from Pablo Batalla ensured a 2-1 win at Hangzhou, whose defender Cao Xuan was sent off for conceding the spot-kick for a foul of Dejan Damjanovic.

The visitors will look to build on that momentum and keep their hopes intact for another week by inflicting a fourth defeat of the league campaign on Evergrande, but down at the bottom the battle against the drop is even closer.

Harbin Yiteng – who take on third-placed Guangzhou R and F in their penultimate fixture – are already relegated and six teams are still in the fight to avoid joining them.

Henan Jianye occupy the final place in the drop zone on 26 points but could move out of the bottom two by beating an 11th-placed Hangzhou side that are still not sure of their own top-tier status.

Dalian Aerbin will seal survival should Henan lose and they overcome Liaoning Whowin, who can also make sure of safety with three points or a draw and a Henan defeat.

Shanghai Shenxin are level with Liaoning three points above the danger zone and will secure their spot in the division for next term with a win over fellow strugglers Changchun Yatai or a loss for Henan.