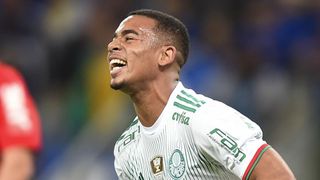 Palmeiras coach Cuca joked he fears Gabriel Jesus being selected for Brazil duty amid interest from the likes of Barcelona and Inter.

Inter president Erick Thohir admitted this week they are keen to sign the 19-year-old, while Barca chief Josep Maria Bartomeu declared his admiration for the talent of a striker the club have already sent representatives to watch.

Gabriel Jesus was named in Brazil's 18-man squad for Rio 2016 on Thursday and followed it up with two goals in Palmeiras' 4-0 victory over Figueirense.

The 19-year-old has now scored five goals in his last three outings and leads the Campeonato Brasileiro scoring charts having hit the back of the net nine times this season.

With a senior international cap likely to be on the horizon under new boss Tite, Cuca light-heartedly expressed concern over the effect it could have on Gabriel Jesus' profile.

"I do not visit Tite's house, but I know what he's like to play against and I know, more or less, what he likes. I'm fearful," he joked.

"Gabriel, I always say, has not yet reached his peak. Games teach players new things.

"There are things to improve, but he will be an excellent player."