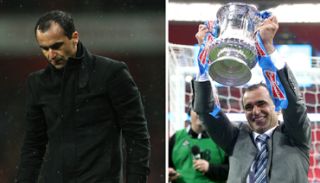 The victory keeps Arsenal in pole position to claim fourth spot and a place in next year's Champions League. They lead North London rivals Tottenham Hotspur, in fifth spot, by one point with the last round of games to be played on Sunday.

Wigan have narrowly escaped relegation several times in recent seasons but their luck ran out at a rain-sodden Emirates Stadium just three days after they had beaten Manchester City 1-0 at Wembley to win the FA Cup for the first time.

"I never expected this to happen, this group of players don't deserve this," said Wigan manager Roberto Martinez. "Winning the FA Cup was incredible but this is a tough, tough day for the club."

In Tuesday's other game, Manchester City, who sacked manager Roberto Mancini on Monday, won 2-0 at relegated Reading with forwards Sergio Aguero and Edin Dzeko scoring late in each half.

City, last season's champions, are now guaranteed second place after Brian Kidd took caretaker charge of the team following the departure of Mancini and his number two, David Platt, who left the club earlier on Tuesday.

At Emirates Stadium, Arsenal dominated the first 20 minutes and took the lead in the 11th when Lukas Podolski headed home from six metres after the Wigan defence failed to deal with a corner.

The visitors came back into the game and referee Mike Dean penalised a tackle by midfielder Mikel Arteta on Wigan's Shaun Maloney just outside the Arsenal area shortly before half-time.

Maloney's free-kick arced over the wall and just inside Wojciech Szczesny's left-hand post after which Dean was booed off the pitch by the home fans at the break.

The second half was a full-blooded, equally matched contest until Arsenal's England forward Theo Walcott met a cross from the right by Santi Cazorla to steer the ball into the Wigan net at full stretch in the 63rd minute.

Arsenal went 4-1 up when Aaron Ramsey broke free on the left and ran unchecked into the area before blasting the ball home.

"Wigan were coming off a fantastic cup win and we knew it was going to be difficult," said Walcott. "We showed character and in the second half we showed what we are really made of."

Wigan, who have been in the Premier League since the 2005-6 season, have 35 points with one game remaining, four fewer than Sunderland in 17th position. Bottom club Queens Park Rangers have already been relegated along with Reading.

Arsenal have qualified for the Champions League in every full season Arsene Wenger has been in charge since he became manager in 1996, and they travel to Newcastle United on Sunday knowing they can guarantee qualification if they win.