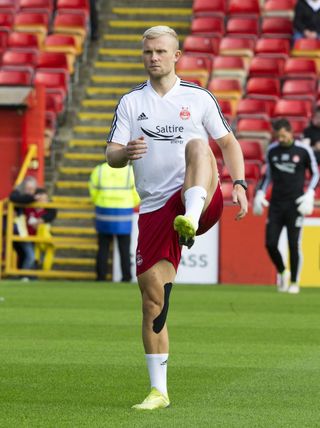 The Dons had not scored for 454 minutes and failed to find the back of the net in open play for 639 minutes, prior to their trip to Hamilton – but emphatically ended the barren run with a 3-1 success.

Main, who got the nod ahead of 21-goal hitman Sam Cosgrove, halted their long wait for a goal when he opened the scoring after 15 minutes.

McInnes said: “It almost felt as if a weight had been lifted when Curtis scored.

“The tenacity has been there but the output in the final third has fallen way short.

“Tonight was much more like it. We scored three goals and had one chopped off but I would have taken any sort of win tonight.

“For me Curtis Main, more than any other player, has had fewer opportunities. Every other player has had more minutes and the reason is because you can change wide players – but when you have a 21-goal striker in the building, it’s different to leave that out when you are searching for goals.

“Sam is maybe lacking a wee bit of confidence and ‘Mainer’ was bursting to get that chance.

“It’s real testament to Curtis’ professionalism, motivation and single-mindedness that he wanted to show he can be the main striker here.”

Accies first team coach Guillaume Beuzelin slated his side’s first-half display and insists there must be a reaction in their bottom-of-the-table clash with Hearts on Saturday.

Beuzelin said: “I thought we were horrendous in the first half. If we want to compete against that calibre of team, we have to do the basics right.

“The manner in which we conceded those three goals is terrible.

“We warned the players of the danger of this type of game. We knew Aberdeen would be like a wounded animal. They showed us today that they wanted it more than us.

“Saturday is massive. A team like Hearts, it’s absolutely huge. We need to be prepared for a massive fight on Saturday.”

Meanwhile, Beuzelin revealed captain Brian Easton was taken to hospital after injuring his shoulder during the first half.