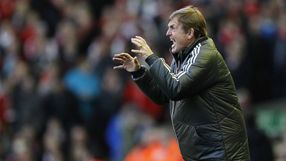 The loss was the Merseysiders' sixth in seven Premier League games and left them eighth in the table, a point behind local rivals Everton.

They have not finished outside of the top 10 since being promoted to the top flight under Bill Shankly in 1962.

"I think we've just got to stick together," Dalglish told reporters.

"It's up to us to harness the frustration and disappointment properly, work on it and take it as a positive because if they start to enjoy losing games, we'd have a problem."

Liverpool, winners of the League Cup in February, have taken only eight points from their last 12 games, falling out of contention for a place in the Champions League.

Their current run of form is the second worst in the league with only bottom club Wolverhampton Wanderers suffering more.

Dalglish, whose first spell as manager ended with his resignation in 1991, will not quit or be sacked, according to former Liverpool team mate Mark Lawrenson.

"I don't think he'd walk away," Lawrenson said on the BBC.

"I don't believe he'll be sacked. It's a poor run, but the new owners are not going to make knee-jerk decisions."

Liverpool play Aston Villa next week, followed by an away trip to Blackburn Rovers and an FA Cup semi-final against Everton.

They will be without goalkeeper Pepe Reina for all three games following his red card in the final minutes after appearing to aim a butt at Newcastle defender James Perch.

"The frustration and disappointment resulted in the actions Pepe took when he got a deserved red card," Dalglish added.

Former Newcastle striker Andy Carroll, the most expensive English player after his 35 million-pound transfer last January, appeared to swear at Dalglish as he left the field having been substituted.

Carroll, who has scored only three Premier League goals for Liverpool this season, gave vent to his frustration, pulling his shirt off and walking straight down the tunnel to the dressing rooms.

He had endured a miserable return to Newcastle. He was booed throughout by the home fans, booked for diving and saw his successor in Newcastle's number nine shirt Papiss Cisse score both goals.

"He was frustrated with the way the game had gone," Dalglish told reporters. "Not just for himself but for the team.

"We have not got a problem with people showing desperation or disappointment or frustration, but we need to channel it better.

"We will try to remain calm and sort out the problems that we have."