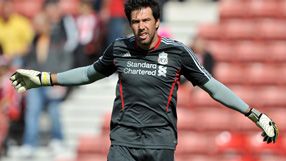 The previously ever-present Spaniard was sent off in acrimonious fashion at Liverpool’s 2-0 defeat to Newcastle last Sunday after a headbutt on Magpies full-back Danny Simpson.

He will serve a three-match ban that will also see him miss the crucial FA Cup semi-final against bitter rivals Everton next weekend.

Alexander Doni, pictured, and Brad Jones are both vying for the chance to deputise for the suspended Reina, the latter not having been included in a match day squad for Liverpool since Roy Hodgson’s tenure as manager.

Dalglish admits to being impressed with the training ground work of both his deputy goalkeepers, especially Doni who was signed on a free from AS Roma in the Summer.

However, he has, as of yet, declined to confirm who will start between the sticks this weekend.

"He is very experienced, coming from Italian football," Dalglish said of Doni on Sky Sports News.

"He has worked really hard. He has got a lot sharper since he has been here with the work he has put in and he has been a real credit to himself.

"To play the game, for him, would be the next test.

"It is unfortunate circumstances for Pepe (Reina). But someone else can step in, either (Alexander) Doni or Brad (Jones)."

Doni previously played for Serie A giants AS Roma where he amassed 199 appearances for the Giallorossi before moving to Liverpool at the end of last season.

Meanwhile, Brad Jones joined the Merseyside outfit in 2010 from Championship side Middlesbrough in 2010 for a fee of £2.3million.