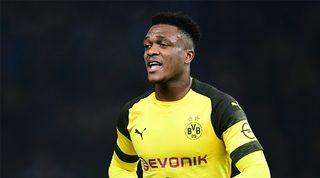 Borussia Dortmund defender Dan-Axel Zagadou has told the club he wants to leave, opening the door for a potential move to Arsenal.

Unai Emery has focused on defensive reinforcements this summer, with moves in the works for Celtic left-back Kieran Tierney and Saint-Etienne centre-back William Saliba.

With Zagadou open to a move, reportedly frustrated by Dortmund's re-signing of Mats Hummels, he has emerged as another option.

Arsenal already have a strong ex-Dortmund contingent at the club comprising of Sokratis Papastathopoulos, Pierre-Emerick Aubameyang and Henrikh Mkhitaryan, and it's thought that Zagadou would be keen on reuniting with Aubameyang especially.

Arsenal have also suffered from a lack of pace in defence over recent years, and the 20-year-old Frenchman would go some way to solving that problem.

However, with his value in the region of £27m - a fair chunk of Arsenal's £45m budget for the summer - they would likely need to sell some players to fund any deal.

QUIZ Can you name the top three Premier League assisters from these nations?