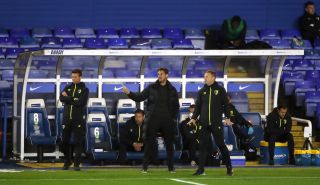 Bournemouth manager Jason Tindall praised Dan Gosling for making the most of his opportunity as the midfielder’s two goals helped the Cherries beat 10-man Coventry 3-1.

In a dominant performance, Bournemouth got the better of the home side despite going into the break level after Matty Godden’s penalty cancelled out an early Jefferson Lerma strike.

The second half really showed the gulf in quality between the two sides, with the restored Gosling scoring twice before Coventry midfielder Gustavo Hamer was sent off.

Bournemouth were missing attackers Arnaut Danjuma and Josh King but former Everton and Newcastle midfielder Gosling stepped up in their absence to provide the goals.

Cherries boss Tindall said: “We had some real attacking quality that didn’t play in tonight’s game. So I’m absolutely delighted for Dan Gosling stepping up.

“He’s good for a goal, we’ve had players missing tonight so he had to come in and give us that threat, coming into the box at the right time.

“He has popped up with some good goals in the past. I’m delighted with his overall performance and so pleased he has managed to score two goals. His second was a great strike.”

On his side’s performance – which put the Cherries top of the Championship as they search for an immediate return to the Premier League – Tindall added: “I felt we deserved it with the performance we put in.

“We played well and they had very very little in the way of chances apart from some long-range efforts.”

Coventry manager Mark Robins felt his team had nothing to be ashamed of as the newly-promoted side took on one of the promotion favourites.

“Against a team just down from the Premier League, it was an eye opener,” he said.

“You are going to come up against good players and teams that are better and this was one of those times.

“It’s a good game for us to use, learn and pick the bones from – because if you’re not bang on it, you will be bang in trouble.

“We were fortunate to go in level at half-time. But we didn’t play our game, and kept giving (the ball) back to them.

“They were quick and they made it difficult.

“There is no disgrace in losing to Bournemouth but we need to make sure we don’t dwell on it too much and let it cause an issue with our confidence. We have to move on.”

On Hamer’s red card, which came after an off-the-ball altercation which saw the midfielder raise a hand to the cheek of Bournemouth skipper Steve Cook, Robins added: “I think it’s a really harsh sending off.

“I don’t know what the referee’s thinking is. Hamer has touched his face, he’s done nothing and it’s forced the ref to make a decision we didn’t want. That was a big disappointment.”