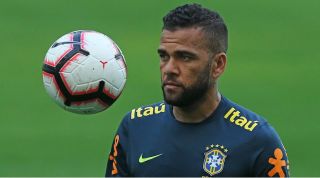 Dani Alves says he rejected the chance to rejoin Barcelona and Juventus this summer.

The Brazil international returned to his homeland to sign for Sao Paulo in August.

But the right-back says he could have returned to the Camp Nou or the Allianz Stadium instead.

However, he has hinted that the lack of a long-term contract offer from the two European clubs persuaded him to return to Brazil.

"I was looking for stability going into the 2022 World Cup but the only team to offer me that was the club of my dreams: Sao Paulo," he told the Players' Tribune.

"The rest of the clubs didn't believe in me.  I've always been a free transfer. I decided where to play and when I'd leave."

Alves hopes to add the 2022 World Cup to his list of international honours, having won the Copa America with Brazil in 2007 and 2019.