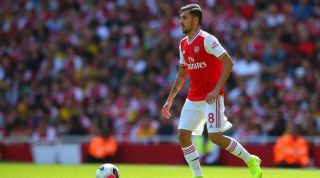 The Spain international joined the Gunners on a season-long loan deal over the summer after struggling to gain regular game time at the Bernabeu.

Ceballos has made an encouraging start to life in north London and has spoken of his delight at the opportunities afforded to him by compatriot Unai Emery, which he hopes will help him earn a spot in Spain’s Euro 2020 squad next summer.

"A player is not happy if he doesn't play, [but] when he feels important and does [play], then he is happy," Ceballos told Radio MARCA.

"Obviously I have been at Real Madrid, I have learned from the best and I have won trophies, but it is easier when you play matches.

"I'm happy and I feel important [at Arsenal], with room for improvement to play at the Euros next year."

However, any hopes Arsenal held of tying down the 23-year-old on a permanent deal were dealt a blow as the midfielder set out his long-term objectives.

"I never thought of leaving permanently," he said.

"My goal is to succeed at Real Madrid. I'm going to fight to fulfil my dream."

Ceballos also hit back at the suggestion that he complained about not enjoying his football in the Spanish capital.

"My words were misunderstood," he explained.

"When I do not play, I don't enjoy myself. I have learned a lot in these two years at Real Madrid, but now I am enjoying [my football].

"I knew that it was an important year, the coach [for Spain, Robert Moreno,] has doubts and the one who doesn't play isn't going to be called up; it was a good time to go out on loan.

"With Emery's confidence, I may have a chance of going to the Euros."

Ceballos has his sights set on heading to Tokyo for the Olympics as well as the European Championship.

"It's something I may never get to play [again] in my life," he said.

"It would be my dream to go. I've spoken to people at the [Spanish Football] Federation who know that I'd like to go - I'd be delighted.

"I want to go to the Games and the Euros. These are two tournaments that demand a lot of responsibility.

"I don't care about not having holidays, I'm 23 years old and I'll rest when I'm older."