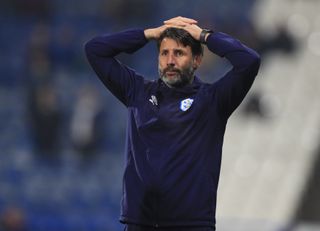 Huddersfield manager Danny Cowley accused his relegation-threatened side of lacking a “ruthless edge” in their 0-0 Championship draw at Reading.

In a dour match of few genuine chances, Huddersfield’s 18-goal top scorer Karlan Grant was mostly well marshalled by the home defence and unable to add to his tally.

Reading were poor going forward and were grateful to goalkeeper Rafael for making a fine save from Alex Pritchard’s deflected drive towards the end.

“I thought it was a really good performance,” Cowley said. “We showed a lot more energy than we did on Saturday (drew 0-0 with Preston).

“We also showed much more attacking intent than we did on Saturday.

“But I was disappointed that we didn’t take our chances. We lacked that little bit of coolness and that ruthless edge.

“But to keep three clean sheets on the trot – and at this time of the season – is a credit to everybody.

“I suppose we could be criticised for our final action. Maybe we had too many touches to get our shots off. Maybe we were trying to be too precise.”

“We’re now in touching distance of reaching 50 points,” Cowley said. “But we still don’t know if that’s going to be enough (for safety).

“But again, all those clean sheets are massive. We defended really well this evening because Reading are a very good team offensively.

“I’m not counting on the fact that Wigan might be deducted 12 points. We’re just going to try to get the necessary amount of points to stay in this division.”

Reading had won 5-0 at Luton on Saturday but struggled to break down a solid Huddersfield defence.

“We’ll take a clean sheet, obviously,” Reading manager Mark Bowen said. “You’ll always be happy with that, whoever you’re playing and wherever you are.

“We were a little bit nervous tonight and little bit lacking in the final third. We showed a lack of quality in that area.

“We just didn’t do it where it counts.

“We had a few opportunities and, of course, Huddersfield did, too.

“We had good chances to get crosses in towards the end but we didn’t do that, either.

“I suppose we really didn’t do enough quality-wise to get the victory – and turn the one point into three points.

“Sure, our (poor) form at home is something that we have to be mindful of.

“We’re aware of it and, in our own backyard, we’d like to get it sorted out.”