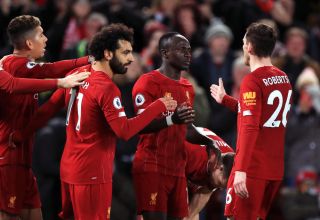 Liverpool cannot stop winning at the moment, after data published on Monday showed the Premier League leaders are also the cleanest team in Europe so far this season.

Jurgen Klopp’s Reds have committed just 8.1 fouls per game to date in 2019-20, the lowest number of any club out of 35 European domestic leagues which were included in a survey by the CIES Football Observatory.

Liverpool are 16 points clear of second-placed Manchester City in the Premier League table with a game in hand after their 2-0 win over bitter rivals Manchester United on Sunday and well on course for a first top-flight title since 1990.

The Premier League featured the least fouls per match (20.4) of any of the 35 competitions surveyed and eight of the top 18 places in the fair play table were held by English clubs, with Newcastle, Bournemouth, Leicester, Chelsea, Norwich, Tottenham and City being the others.

Danish club Silkeborg were second to Liverpool, while Hamburg were third.

The Danish Super League featured the second-lowest number of fouls per match (21) with the Dutch Eredivisie third on 21.6.

The average number of fouls per match across the leagues was 27.2.

The Premier League Fair Play table on the Football Association website shows that Liverpool have incurred 23 yellow cards and one red card in their 22 league matches to date. Only Leicester have accrued fewer disciplinary points than the Reds.