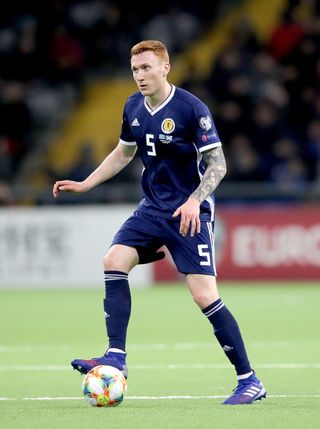 Centre-backs David Bates and Michael Devlin have been called into the Scotland squad after two other defenders pulled out.

The pair came in for Norwich captain Grant Hanley and Sheffield Wednesday right-back Liam Palmer ahead of the Euro 2020 double header against Russia and Belgium.

Hanley missed his team’s defeat at West Ham on Saturday with a groin strain while Palmer played 75 minutes in Wednesday’s defeat by QPR after missing three matches with a back injury.

Clarke was waiting until after the weekend action before naming a fourth central defender after including Leeds skipper Liam Cooper, Hanley and Charlie Mulgrew in his initial squad.

Devlin came through his comeback from a hamstring injury in Aberdeen’s 3-0 victory over Ross County while Bates also got the nod despite his wait for a league debut for Sheffield Wednesday continuing.

Greg Taylor did not feature for Kilmarnock for the second game running after manager Angelo Alessio claimed the Celtic target had a hamstring injury, but the left-back remains in the squad.

Mulgrew made his league debut for Wigan in a goalless draw with Barnsley.

There was some positive news up front for Clarke as Matt Phillips and Johnny Russell both scored for their clubs and Oli McBurnie made his first Premier League start of the season for Sheffield United.

Phillips struck for West Brom in a 3-2 win over Blackburn while Russell headed his ninth goal of the Major League Soccer season as Sporting Kansas City beat Houston Dynamo 1-0.

Steven Naismith came on in the 81st minute of Hearts’ 2-2 draw with Hamilton after returning from injury but did not feel well enough to start after reporting tightness and pain in his hamstring.

Hearts boss Craig Levein said: “He wasn’t confident he could play 90 minutes. He thought the problem would be tiredness in that the longer he played the more likely he would make it worse.