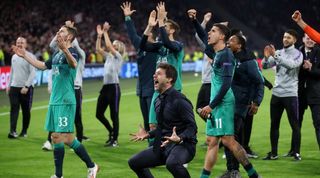 Mauricio Pochettino’s side booked a place in the final against Liverpool with an extraordinary second half comeback away to Ajax on Wednesday.

Trailing 2-0 on the night and 3-0 on aggregate at half time, Lucas Moura scored a hat-trick, his third coming deep in stoppage time, to send Spurs through on away goals.

It is the first time the north London club has reached a European cup final and Ginola, who represented Spurs from 1997-2000, believes it has elevated them among the sport’s elite.

“When you look at the players celebrating with Mauricio Pochettino and the fans at the end of the game, you realise how important it was,” the Frenchman told TalkSport.

“Everyone realised yesterday that Spurs is now one of the clubs to take into consideration.

“The combination of Daniel Levy [the chairman], the club itself, Pochettino, the players makes Spurs what they are now on the planet of football – one of the greatest clubs around.”

Tottenham will face Liverpool for European football’s most coveted trophy at the Wanda Metropolitano Stadium in Madrid on 1 June.