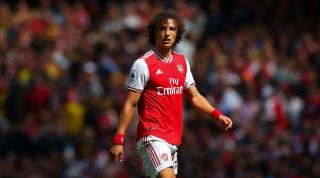 Nigel Winterburn believes Arsenal should identify a centre-back for the future in the transfer market.

The Gunners are reportedly on the lookout for a new defender in the January window, with Bayern Munich's Jerome Boateng among those linked.

Mikel Arteta is keen to bolster his backline after Calum Chambers suffered a serious knee injury on New Year's Day.

Arsenal signed David Luiz from Chelsea last summer but have struggled at the back for much of the campaign.

And Winterburn has called on his former club to take a longer-term approach to recruitment in what has become a problem position.

"We’ve been talking about Arsenal addressing a problem position at centre-half for three or four seasons now, but I guess it’s down to the manager to decide where he thinks it’s most vital to improve the squad," he told Gambling.com.

"What money has he got to spend? Can he get the right players in January? It can be very, very difficult in such a short window. If I’m honest, I don’t see Arsenal doing a lot of business this month, but it’ll be interesting to see what Arteta does.

"They’ve been linked with a lot of players over the course of the last year and centre-half is still a priority. My feeling is that Arsenal shouldn’t bother with another short-term fix, they’ve got to use their money more wisely.

"I think it was obvious that David Luiz was never Arsenal’s first-choice transfer target last summer. The amount of money they were reportedly ready to spend on a new defender, only to settle for Luiz at the last minute, suggests he was a Plan B or C.

"Since Arteta’s come in, Luiz looks a lot better defensively. We know he’s got a lot of ability on the ball, but now he’s showing quality when he’s on the back foot too.

"But I think Arsenal need to concentrate on getting that back four tighter together, as well as the protection in front of them. At the moment, I think Arteta is going to have to work with what he’s got."