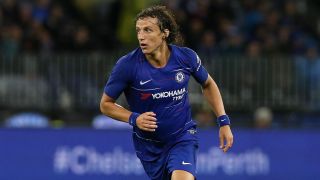 David Luiz has no intention of leaving Chelsea as he enjoys life under new head coach Maurizio Sarri at Stamford Bridge.

Brazilian defender David Luiz was frozen out by former boss Antonio Conte last Premier League season but the veteran is back in the fold following Sarri's appointment.

Sarri's tenure has opened with victory over Perth Glory in Australia and a penalty shoot-out win against Inter at the International Champions Cup – David Luiz marshalling Chelsea's defence in both fixtures.

And the 31-year-old – who re-joined Chelsea in 2016 having originally arrived in 2011 before leaving for Ligue 1 giants Paris Saint-Germain in 2014 – is determined to remain in London.

"I came back to Chelsea to stay here," David Luiz said.

"When I took my decision to come back here from Paris it was to win the Premier League and to do something again with Chelsea, so I am very happy here."

"I love this philosophy," he said of Sarri. "We play high, with a lot of possession of the ball, in a technical way. He's trying to help us every single day to learn quickly his philosophy, to do our best for Chelsea.

"You guys know me -- I like to be happy, to enjoy my life. We have the best job in the world. [Sarri] came with this idea as a human being, so I think if you're not happy to do your job it doesn't matter if you're a footballer or not. We have to be happy to do our best."