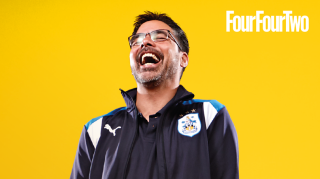 The pair were first introduced in 1991 when a 19-year-old Wagner became Klopp's team-mate at German second division side Mainz, and they remain best friends.

“It was love on the first view, as we say in Germany,” Wagner chuckles in the November 2017 issue of FourFourTwo magazine, available in shops now.

“We became friends more or less from that first meeting. We were able to communicate and we were on the same level. More or less right from the start we became roomies and spent every second around football.”

After working together at Borussia Dortmund – Wagner coached BVB's reserves – the best pals will face off at Anfield this month with the Terriers, 11th after a solid start to life in the Premier League, only three points behind Klopp's Liverpool.

Having already taken points off Crystal Palace and Burnley on their travels this term, Wagner will be hoping his side can help him get one over his good friend.

However, the 45-year-old has told FFT that, were the pair to meet up for a beer following the full-time whistle, he already knows who’d win that particular battle.

“I’m not the best drinker – I need two beers and it’s enough. Klopp’s miles better at drinking alcohol than me!” he jokes

“Yes, I was the best man [at Klopp’s 2005 wedding], but I’ve no idea what the speech was like because I drank too much alcohol!”

After leading Huddersfield from the foot of the Championship to the top flight in two seasons, inevitable comparisons have been made to close friend Klopp, and he knows that media interest will be rife ahead of their October 28 showdown.

But former USA international Wagner insists he’s never been bothered about talk that he is Klopp 2.0, and regards the Liverpool gaffer as a friend rather than a rival.

“I understand all of the excitement in this story from the media,” he says. “Two best friends – sometimes I would say it is more like a family member than a friend – working as managers, working in England and now working in the Premier League, maybe 60 miles from each other. I get this story is great for the media.

“But for me, he is only my friend, just like he was my friend 25 years ago. For me, it isn’t something really extraordinary that he is Jurgen Klopp the football manager. That is the case, yes, but even if he was a chef he would still be my friend and I would still have the exact same relationship with him.”

Read the full interview with David Wagner in the November 2017 issue of FourFourTwo magazine, which focuses on Zinedine Zidane's quest for domination after leading Real Madrid to back-to-back Champions League triumphs. Also this month, we go behind the scenes at the FIFA Interactive World Cup to find out just how serious video games have got, discover why Kaka chose to pull the plug on his £100 million move to Manchester City in 2009, learn about the evolution of fan tribes, visit Ireland to watch a Scottish cup tie, go One-on-One with Edwin van der Sar, and get clued up about Expected Goals. Order a copy today here, and then subscribe!