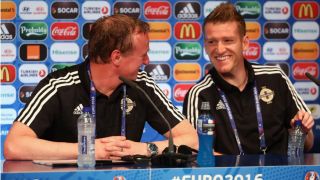 Southampton midfielder Steven Davis believes his Northern Ireland boss Michael O'Neill has what it takes to manage in the Premier League.

The 46-year-old, who led League of Ireland side Shamrock Rovers into the group stages of the Europa League in 2011, has seen his stock rise at Euro 2016 after Northern Ireland emerged from Group C with a victory over Ukraine before being beaten 1-0 by Wales in Paris on Saturday.

Davis signed a new contract to remain at Southampton until 2019 earlier this month but his club are without a manager following Ronald Koeman's departure to Everton, and he feels they could do worse than turn to O'Neill.

"Stranger things have happened in football," he said. "For me, as a player, be it as a player or a manager, everybody needs an opportunity.

"Look at our lads playing at this stage here. They have been playing lower leagues, but showed they are capable of playing to this standard.

"They had a chance to do that and I think it’s the same for managers. It's just somebody having the belief in Michael to give him the opportunity.

"I think he's good enough tactically. We have played against big players in this tournament, players like [Robert] Lewandowski and [Gareth] Bale, and I thought we kept both of them relatively quiet.

"He has managed to find a system that works for us, giving us the best opportunity to get results with the players we have got."

Northern Ireland captain Davis shone within that system, performing superbly at the Parc des Princes before an own goal from Gareth McAuley heralded a cruel end to the country's first major tournament run for 30 years.

"I don’t usually get emotional coming off the pitch but I was close to tears doing the interview straight after the game," Davis added. "That shows how much it meant to us."