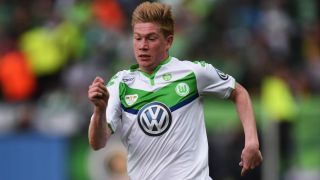 Kevin De Bruyne confirmed there has been "informal contact" with Manchester City, amid reports of a Wolfsburg departure.

De Bruyne has emerged as a transfer target for some of Europe's biggest clubs after starring for Wolfsburg in 2014-15.

City are said to be interested in bringing the former Chelsea attacker back to the Premier League, and the 23-year-old has fuelled speculation of a move to the Etihad Stadium, telling Sky Sports News contact has been made.

"We say to everybody - if they want to do something they have to go to Wolfsburg, not to me," said De Bruyne, who left Chelsea for Wolfsburg in January last year.

"I always thought that I was going to talk to my club first when the season was over. And for me the season is not over. That starts probably next week or the week after but I will also be on vacation.

"I don't have any stress about these things. It will come this way and I know that there are a lot of rumours and the papers are writing a lot."

De Bruyne added: "It's been for me a wonderful season. I think the thing I'm most excited about is that I played almost everything, missed just one game, started everything and played everything.

"My time at Chelsea wasn't bad. Everybody talks about it and that it was really bad but I just decided I didn't want to stay at the club under those circumstances, I just wanted to play football and that’s what I did."