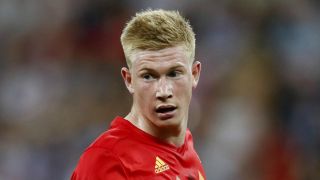 Kevin De Bruyne has developed into a "leader" for Belgium and is "essential" to their World Cup chances, says coach Roberto Martinez.

Manchester City star De Bruyne is yet to score at the World Cup but played a key part in Belgium's last-gasp winner against Japan in the round of 16, the Red Devils coming from two goals down to win 3-2.

Martinez hailed the playmaker's ability to stay cool under pressure ahead of the quarter-final against Brazil in Kazan.

"His role in our team has been underrated. Maybe because at club level he's always at the end of an assist or at the end of a goal and then it's easy to bring a highlight out of Kevin De Bruyne," Martinez said to Goal.

"I think Kevin De Bruyne's influence in our team has been a lot deeper, a little bit more earlier, allowing his team to have the influence that we have in the final third and being a real playmaker for us. And then on top of that he's become a leader.

"I think it's the first time that I've seen Kevin growing into a very important player of this group on the pitch in the most important moments.

"I will always remember there was a moment at 0-2 down against Japan that he's the one that is giving a bit of composure, a bit of belief into the group and he's getting everyone to know that we've still got time to get back into the game. And I think that's a role that allows us to be a team.

"And then you see the third goal and only Kevin De Bruyne can do what he did. And not just the way that he gets that transition so quick from one box to box, it's the quality of the pass, having to play it into Thomas Meunier's path so he doesn't need to break his stride to assist into Nacer Chadli.

"I've been delighted with Kevin De Bruyne's role, his understanding of his importance in this group and the way we want to play. He's essential for us."

Should Belgium triumph against five-time champions Brazil, they will go on to a semi-final against either France or Uruguay.