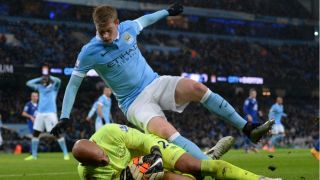 Kevin De Bruyne is determined to pocket some winners' medals as Manchester City battle to keep their quest for honours on four fronts alive.

Second in a wildly unpredictable Premier League title race and through to the last 16 of the Champions League, City host Everton in the second leg of their League Cup semi-final on Wednesday looking to overturn a 2-1 deficit.

Manuel Pellegrini and his players will hope to book a Wembley berth before turning their attention towards an FA Cup fourth-round tie at Aston Villa this weekend.

De Bruyne has started 25 of 30 City appearances since becoming the a club-record signing in August, but the Belgium international is keen to maintain that hectic schedule through until the end of the season in May.

"You want to win a minimum of one cup," he said. "We have a tough second leg against Everton, but we can reach the final.

"This weekend we play in the FA Cup again and in the Premier League we are where we should be in the table.

"Where the Champions League is concerned, it remains to be seen, but for the moment it is going well. We're there."

Previously a Chelsea player before dazzling in the Bundesliga for Werder Bremen and Wolfsburg, the 24-year-old feels fully able to cope with the relentless nature of an English season.

"At this moment I feel fit - physically I have no problems," said De Bruyne, who has 11 goals and 13 assists to his name for City in all competitions.

"As for injuries, I have had no problems for the last three or four years. Physically, I have always been in order. Hopefully it stays that way.

"I see my stats after each games and they remain at the same level. I have not suffered from fatigue and could play every game."

De Bruyne is slightly surprised by the close-fought nature of the battle to lift the Premier League trophy, but feels the picture could become somewhat clearer at the end of February, with leaders Leicester City and high-flying Tottenham set to visit the Etihad Stadium on consecutive weekends.

"At the moment it's close," he added. "Leicester are staying up at the top and Tottenham are still there.

"But we all stand on a handkerchief. If we can win a couple of games, we'll see where we stand after February."