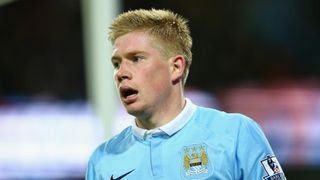 Following a successful loan spell at Werder Bremen in 2013, De Bruyne agreed to remain in the Bundesliga with Dortmund but the move never materialised after Chelsea manager Mourinho rejected the bid.

De Bruyne failed to break into Chelsea's team despite promises of game time and the Belgium international eventually left to join Wolfsburg the following January.

The two-time Bundesliga Player of the Year will face Klopp when Liverpool travel to Premier League leaders City on Saturday and De Bruyne has talked up his admiration for the German boss.

"I had a personal agreement [with Klopp]," De Bruyne said.

"I asked the club [Chelsea] to go because I had a good feeling about Dortmund at the time. I had been good in Germany and he [Klopp] really wanted me because [Mario] Gotze went to Bayern Munich.

"He called me, and said 'You will be the No 1' - at a team who had been second in the Bundesliga and in the Champions League final.

"At the time I thought it was a good decision to go but the manager [Mourinho] told me 'You need to stay and you will get your chance here'. I accepted it and we moved on.

"I think he [Klopp] is a good trainer. I saw the way Dortmund played and they [Liverpool] play the same style.

"He tries to do the same. He is new here, and it will take some time. In the seven years he was there he did a magnificent job."

De Bruyne has settled immediately following his £55million return to the Premier League, scoring six goals in 14 appearances in all competitions for City.