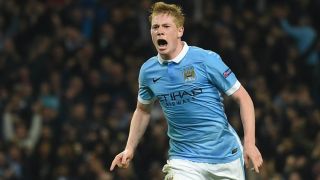 Manchester City star Kevin De Bruyne agreed terms to join Bayern Munich before joining the Premier League side according to his agent.

De Bruyne became one of the hottest properties in European football during a stellar 2014-15 for Wolfsburg, scoring 10 Bundesliga goals and supplying a remarkable 21 assists in 34 matches – including netting twice and making another in their  4-1 win over Bayern.

The Belgium international has moved this prolific form to Manchester since becoming City's record signing in August, scoring 11 times in 27 appearances across all competition's for Manuel Pellegrini's men and scooping three of the club's past four Player of the Month awards.

But De Bruyne's agent Patrick De Koster told Sport/Foot Magazine that Bayern Munich could have been benefitting from this prolonged purple patch.

De Koster claimed his client, who previously starred in a loan spell at Werder Bremen from Chelsea, agreed terms with Bayern, only for the Bundesliga champions to baulk at Wolfsburg's hefty asking price.

"Kevin's heart was beating for the Bundesliga, where he broke through at Bremen and became a star at Wolfsburg," De Koster said.

"I'm convinced he would have played for Bayern if they had been able to pay the asking price.

"We reached a personal agreement with Bayern after two meetings. The deal has collapsed on the asking price."

De Koster added: "I think that Bayern wanted to pay €50 million but no more. In the end City won the race and Kevin is super happy with his move. He adapted fast on and off the pitch."