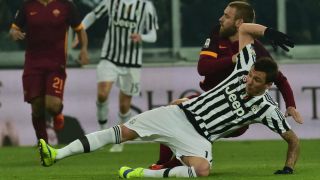 A late goal from Paulo Dybala secured a 1-0 victory for the champions, extending Juve's current winning league run to 11 matches.

Earlier in the match De Rossi clashed with Mandzukic and television footage appeared to show him branding the Croatia international to be a "zingaro" – which translates into English as "gyspy".

Speaking to Italia 1 television programme Le Iene, De Rossi admitted to saying something he should not have done and apologised for any offence caused.

"I was caught by a camera while I was saying a phrase that, in short, I had to avoid saying," the Italy midfielder said.

"It's not the first time you say these phrases and every so often it happens on the field.

"It is not a justification to say that players call each other all sorts of things on the pitch during the 90 minutes and the tone is brought down. I should not have said it."

De Rossi added: "I'm sorry for those who feel offended by that phrase."