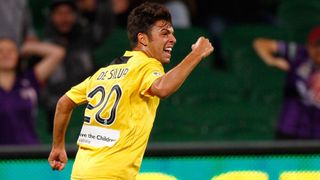 The teenage playmaker came off the bench to score his first senior goal which put the Glory in front in extra-time, with Kenny Lowe’s side going on to win a thrilling quarter-final 4-2 at nib Stadium.

“It’s my first goal in a proper game for Glory so it’s a great feeling to get the goal which puts us in the (semi-finals),” De Silva told Fox Sports.

“Hopefully that’s just the start and I get a few more minutes.

“I showed what I can do today and hopefully the coach was impressed and I can get a few more minutes for the rest of the season.”

The action-packed match had a number of momentum swings, with Victory taking an early lead through Fahid Ben Khalfallah before an Andy Keogh brace had the home side in control.

But just when it looked like the Glory would hold on, Gui Finkler scored a sensational free-kick in stoppage time to ensure an extra 30 minutes.

After Victory’s Daniel Georgievski was sent off for a second bookable offence, De Silva took over scoring on a clinical counter-attack before playing a role in Nebojsa Marinkovic’s match-sealer.

“We’re obviously delighted. That’s what we came out here to do was to win,” De Silva said.

“I thought the boys played really well and we fought hard, think we deserved the points today.”

Glory join Central Coast Mariners, Adelaide United and Bentleigh Greens in the draw for the semi-finals, which will take place on Friday night.