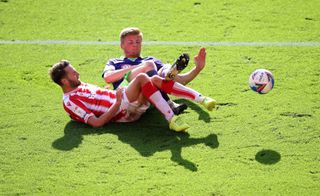 Dean Holden believes there is plenty more to come from his Bristol City side after their convincing 2-0 win at Stoke.

Nakhi Wells put the Robins ahead two minutes into first-half stoppage time from inside the six-yard box and Andreas Weimann secured the points with a minute to go after being played in by Antoine Semenyo.

“This club is aiming to be at the top end of the table,” Holden said. “We are a work in progress and building.

“The players are buying into what we are trying to do and we have got good belief in the group.

“We have had an outstanding start but that is all it is – it is just a start and we are nowhere near where we want to be.

“We have got good young players coming through and we are going to get better.

“We had control of the game. I’m not interested in sending messages to other teams, it is just about us and about gaining momentum.

“Some of our play with the ball was outstanding. We took the game to them in the first 15 minutes.

“This is a hard place to come and you can’t come here and not have a scrap and that’s the pleasing thing this season.

“We are moving the ball well and creating big chances in games. We’re clinical when we get the chances and we are keeping our goal relatively quiet.

“Every performance has to have a bit of everything. You have to scrap, you have to pass well and we saw that today.”

Stoke boss Michael O’Neill admitted his side had not been good enough.

“It was a frustrating game,” he said. “We did not start well and Bristol had the better of the opening 15-20 mins.

“We were much improved and it was more competitive after that and then we lost a really poor goal before half-time.

“We gave ourselves a mountain to climb and were unable to do that, then we lost another poor goal.

“For periods of the game we were poor technically and did not take care of the ball enough.

“I was disappointed with how we started. We played a good team and we have to give them credit, but we were not brave enough at times in the early part of the game and that is something we need to change.

“We are in the early part of the season and have players who are still adapting and getting up to fitness. We believe we have enough options to be a threat and we have to show that more than we did today.

“Home form is important to any club, but in the current climate home form is hard to gauge.

“It is one game and we have to take it for what it is and move on to next week.”